“August Recher” is winemaker, Bob Mueller’s grandfather who was a winemaker and distiller in Ziefen, Switzerland in the early 1900’s.

Our second wine, the 2008 Mueller “Eastside” Pinot Noir is a tribute to the Vino Farms vineyards on Eastside Road where we have purchased our grapes for 20 years. Many thanks and much admiration to the Ledbetter family. 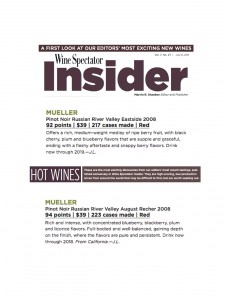